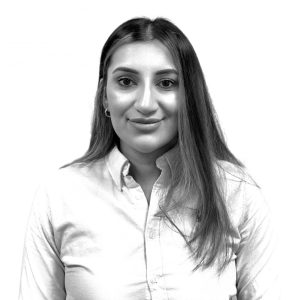 Financial markets have continued to deliver positive returns amid a backdrop of geopolitical headwinds and the ongoing global pandemic. Although there has been some short-term volatility causing major market indices to retract from earlier year gains, overall, investors remain optimistic on the economic outlook over the longer term. During a period of market turbulence, some economies have faced greater hardships in comparison to others, which continue to shape our investment thesis and asset allocation across portfolios. More recently, China has taken centre stage in financial markets, as regulatory clampdowns have become more prominent in key sectors such as Technology and Property and the impacts these will have on economic growth for one of the world’s largest economies.

The debacle surrounding Evergrande and its ability to pay back its $300 bn debt has highlighted the cracks in the Chinese real estate sector. A potential collapse of the property giant is no longer weighing on investor sentiment, with the firm selling assets to reduce debt levels – the most recent being its sale of the 20% stake in Shengjing Bank Co for $1.5 bn. Despite the magnitude of Evergrande’s debt problems, the impact it will have on the Chinese economy may have been somewhat exaggerated.

The debt accrued by the firm only accounts for 0.1% debt of the total bank lending in China, therefore a possible default is unlikely to have a detrimental impact on the financial system as a whole. In addition, contagion from Evergrande onto other property firms will be contained as a sector-specific risk rather than a bigger risk to the wider economy. As shown by the chart below, Evergrande’s debt, when measured against major global debt crises over the decades indicates the risk is relatively moderate in comparison with the prospect of defaults being highly unlikely. Additionally, the global context is different when reflecting upon the Financial Crisis in 2008/9, with liquidity conditions now more favourable and world financial markets more resilient to economic shocks. 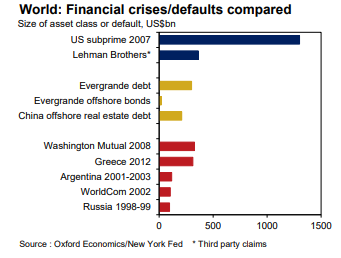 The Chinese property sector has been under scrutiny since 2017, and with Evergrande now at the forefront, this may trigger a slowdown in China’s real estate sector over the short to medium term. Following a 25-year boom in the housing market, China faces a structural slowdown, with expectations that demand for new housing in China is likely to halve by the end of the decade. Moreover, given the large overall footprint of the residential real estate sector via related sectors such as steel and general commodities, this may lead to weaker economic growth overall.

Earlier this year, the government intensified its crackdown on leading tech companies, as firms such as Tencent and Alibaba face losses of circa 20% to its market capitalization in a bid to bolster protection laws and data security.

Less well covered was the Chinese government’s introduction of regulations which compelled educational services firms to convert to non-profit states and forbidding the hiring of foreigners to teach remotely. Although the objective of such regulation is to level the playing field between competitors and reduce inequality, it has increased the disconnect between private businesses and government. Private education providers such as New Oriental saw stock prices plummet from $19.68 to $2.18 on the New York Stock Exchange during the third quarter, and although firms are recovering from August lows, the road to recovery will be bumpy.

The outlook for China remains uncertain in the short term, with supply chain disruptions continuing and energy prices increasing, one of the world’s largest economies is set to face prolonged headwinds. A cooling real estate sector paired with tighter regulations and credit conditions, substantial downside risks remain, however, if pressures continue in certain sectors of the Chinese economy, the government will take bolder measures to avoid a contagion of risk. In addition, lingering impacts of earlier Covid outbreaks is also weighing in on domestic spending, with the near-term view economic growth will remain subdued.

Overall, with the view that the downside risks outweigh the upside, our Emerging Markets holdings have reduced exposure to Chinese equities sensitive to short term economic uncertainty; however, some opportunities remain, given the longer-term growth outlook.