Whilst we are providing updates on a weekly basis, we have provided a snapshot of global markets over the last month as we would do normally and it is pleasing to see that April, in the main, has been a strong month for global equity markets despite some renewed weakness yesterday on the final day of the month. 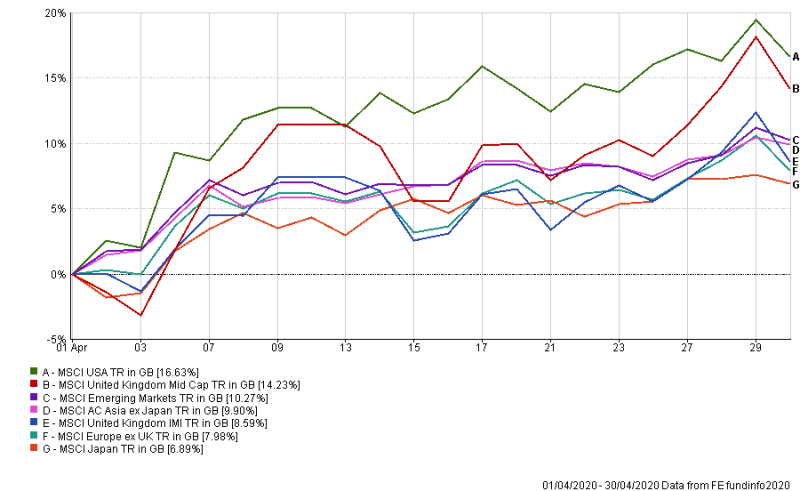 This week did get off to another positive start, helped by a slowing in Covid-19 daily infection/mortality rates and discussions on how to ease lockdowns and re-open economies across the world. Better news regarding Gilead Sciences’ Remdesivir drug as a potential treatment, along with Oxford University’s partnership with AstraZeneca in their quest for a vaccine, contributed to the positivity.

This positivity was replaced on Thursday, and is continuing today, as the United States announced a first quarter economic contraction more than originally forecast along with negative stock news and in particular Shell’s announcement to cut quarterly dividends by two-thirds for the remainder of this year. This is something we have discussed in previous updates but is likely to be an on-going feature over the coming months.

We have made further changes to portfolios this week, reducing our exposure to Europe (weaker outlook and political pressures) and also Asia (reducing a slight overweight) in favour, once again, of bolstering our allocation to America. This was achieved by selling completely out of Crux European Special Situations and by trimming our holdings of Stewart Asia Pacific Leaders and L&G Asian Income (for Growth and Income models respectively).  We continue to favour the US market to lead the World out of the current crisis and have added to existing iShares S&P 500 and JP Morgan US Equity Income funds on the premise of increasing the overall “quality” within portfolios.

Our Q1 Valuations to the end of March 2020 have now gone to print and will be going out over the coming days. Assuming there are no major backlogs in the postal service then these should be received shortly.