Global Equity markets retreated in August as trade tensions between the US and China intensified and closer to home Brexit, took another new twist. Performance of some of the main indices are highlighted below. 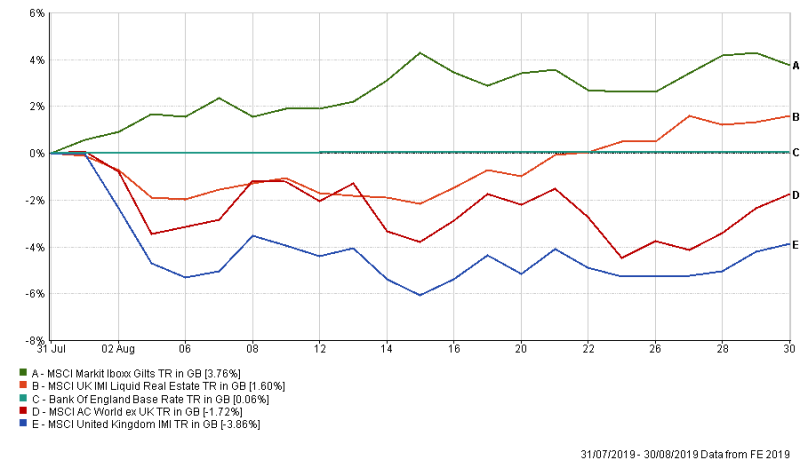 Immediately after the Federal Reserve cut rates for the first time in over a decade, President Trump refocused his attention on China, announcing additional tariffs on a further $300bn worth of goods. This sent markets tumbling and in response, China allowed its currency, the Yuan, to devalue versus the dollar which only heightened investors’ concerns.

Despite there being a cooling in tensions during the middle of the month, economic data releases showing a slowdown in growth both in China and the EU failed to lift enthusiasm and saw markets remain flat for the rest of August.

On the domestic front, sentiment both in and towards the UK was also affected as Boris Johnson sought permission from the Queen to prorogue (suspend) Parliament, with the aim of bringing forward new legislation and ensuring the UK leaves the EU on October 31st. Politicians return to office this week and September is likely to be another interesting month in UK politics.

Our portfolios have not been immune to the wider market falls and ended down for the month of August.