The final month of 2019 was very positive for our own market and the exact opposite to the end of the previous year. The performance of some of the main asset classes is highlighted below. 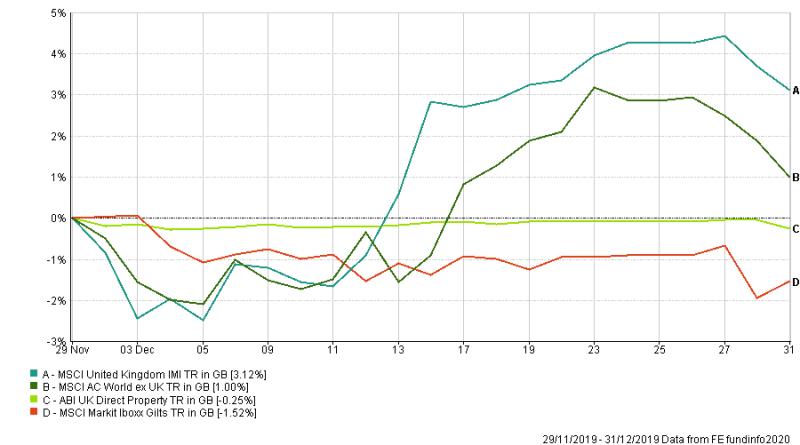 In performance terms, we have been up against it for much of 2019. The continued strength of the US market, where we have a slight underweight, and the style favour of growth and momentum have been major headwinds for our portfolios.

The final quarter of 2019, however, has seen a number of factors come into line and boost investor sentiment. The ongoing trade dispute between the US and China, which has dominated headlines for well over a year now, appears to be resolving with phase one of a deal being announced. Closer to home, the General Election result has brought an element of certainty and the UK equity market has responded positively, as demonstrated in the chart above. The third factor has been a reversal in the fortunes of ‘value’ orientated companies, after a period of relative underperformance compared with growth/momentum.

Certainly, over the month, our overweight exposure towards UK equities, and in particular mid and smaller companies that are more traditionally domestically focused, has been a positive contributor to both absolute returns and relative performance.

It has been a strong end to the year for equity markets and across our portfolios, our emphasis towards equities has seen relative outperformance for a number of months. A more detailed analysis of financial markets and performance will be provided with our year-end valuation reports, which will be issued in the coming weeks.