Despite starting with great promise, events conspired to turn sentiment off slightly through January, as a series of non-finance related issues dominated news flow. Performance of some of the main asset classes is highlighted below. 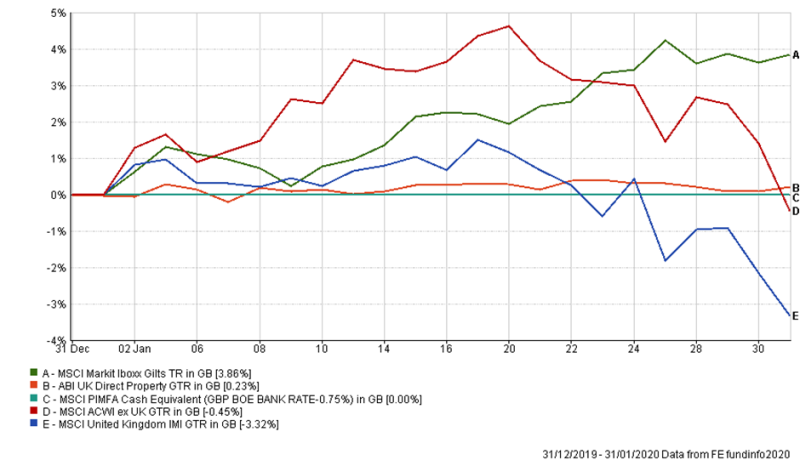 The killing of the Iranian General Qasem Soleimani heightened geopolitical risk early in the month as tensions rose between the US & Iran.  An initial shock to the oil price ensued, but soon subsided as rhetoric became far less intimidatory. Whilst there remains the prospect of a spike at some point, we are hopeful that sense prevails and the de-escalation will continue.

Later in January, fears over Chinese Coronavirus provided a further headwind to sentiment. Although currently appearing much less potent than either SARS or Ebola, its timing could not be worse as it coincided with the largest annual human migration – the Chinese Lunar New Year celebrations – increasing the likelihood of it spreading. It is too early to be conclusive but the virus will probably affect shorter term economic growth numbers for the region with many cities on lockdown and the full effects likely to unravel over the coming months.

Elsewhere, January 31st saw the UK finally leave the European Union and formally enter into a transition period. The UK wasn’t immune to the wider market sell-off, but as we have seen through the second half of 2019, it is being viewed more encouragingly by investors, which should continue to benefit our portfolios.

We continue to be optimistic on equities for the year ahead expecting markets to re-focus on fundamentals but will, of course, keep a mindful eye on developments that could see a further rise in the negative sentiment experienced this month.