Markets continued their trend higher through July, buoyed by an expected interest rate cut in the United States and a soothing of tensions in the on-going trade talks with China. Performance of some of the main indices is highlighted below: 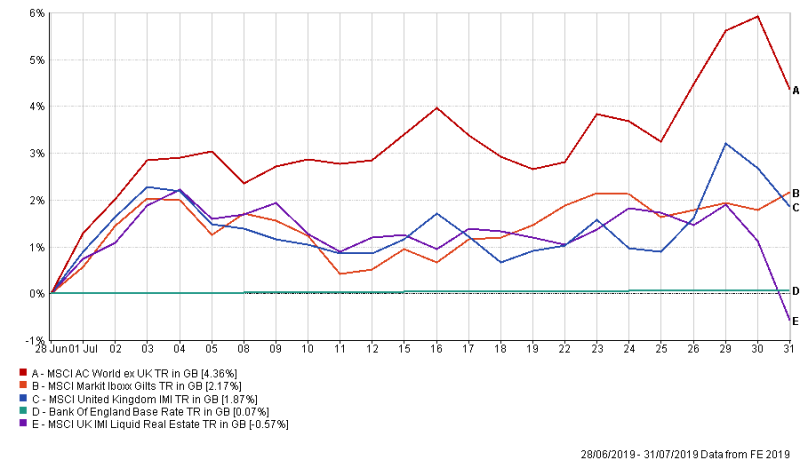 Jerome Powell’s Federal Reserve delivered on expectation on the final day of the month, cutting rates for the first time since 2008 and marking a significant U-turn in policy. Despite pleasing markets, the 25-basis point cut still wasn’t enough for President Donald Trump who is becoming increasingly vocal in his interference with Monetary Policy.

Closer to home there was a changing of the Prime Ministerial guard as Boris Johnson formally took over from Theresa May and we await to see what fresh impetus he brings to Brexit talks ahead of October 31st deadline. Markets appear to be increasingly pricing in a no-deal scenario with Sterling bearing the brunt of investor concerns – helping to push the main index higher.

Over the month, our models generated an equally strong, positive return moving broadly in line with their respective benchmarks.

We made a further slight change to our portfolios at the beginning of July.

The AXA Framlington UK Selected Opportunities fund was a small holding within our UK Equities, having taken the decision to reduce our exposure to the fund after Nigel Thomas announced his retirement in 2018. It was an opportune time to remove the holding completely, especially given ongoing Brexit concerns.

Within the Cautious models the money was redirected into the Artemis Strategic Bond fund, increasing our Fixed Interest exposure. In Balanced portfolios we have added to the Invesco Perpetual European Equity Income fund, for income investors, and the Investec Diversified Income and Polar Global Insurance funds for growth investors. Finally, for our Adventurous models the money went exclusively into the Polar Global Insurance fund.

All of the changes have been made with the aim of generating higher returns and managing risk across the various different profiles.