Markets began the second quarter in the same manner that they ended the first, as most moved pleasingly higher. Performances of some of the main indices are highlighted below: 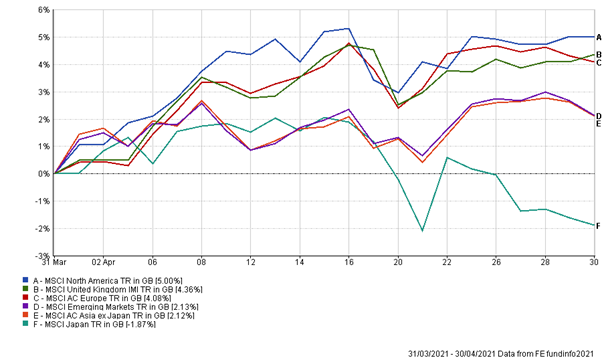 As we pointed out last month, there continues to be a divergence in the performance of developed western markets from those in the emerging east which we believe can be explained by a catch-up in economic optimism.

Data releases in the US and UK this month have both indicated a much stronger return than some had predicted. This gives further confidence to investors of the path forward for the two nations and with Europe now also stepping up its vaccination programme, investors have renewed optimism that the bloc can follow its Western peers. The better economic figures were backed up by a solid earnings season in these developed markets and again provided further support to markets.

Whilst Europe has regained its control over the virus, we have witnessed terrible scenes in places such as India and Brazil throughout April, which is a sobering reminder of how important it is that progress is made universally against the virus. Vaccinations remain key for the global economy to begin functioning as normally as possible as quickly as possible.

Over the month our portfolios have generated positive returns, building upon the strong start of the year overall which remains above our stated benchmarks.