Whilst not as rewarding as November, equity markets continued their move higher last month allowing us to wave goodbye to a difficult year on a positive note. Performance of some of the main indices are highlighted below: 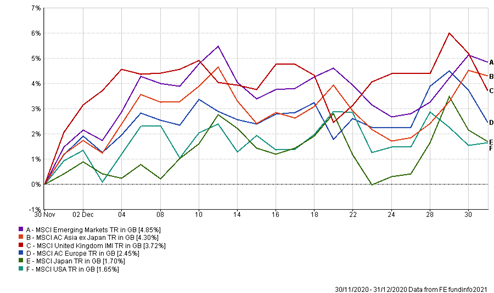 Four years, six months and eight days after the referendum, the UK finally completed its separation from the European Union after an historic trade deal was agreed. The announcement, made on Christmas Eve, allows goods to continue to move between the two states free from potential tariffs and quotas. Although much of the agreement is yet to be digested it appears, as expected, common sense has prevailed, and compromises made on both sides and markets have certainly reacted positively.

Elsewhere, following last month’s vaccine news, it has been encouraging to see the roll out of the Pfizer vaccine across the UK along with the approval for the Oxford/AstraZeneca vaccine. Sadly, it appears these cannot come soon enough, as infection rates across soar and we enter another critical period in January. Lockdowns both here and abroad continue to tighten, and we again monitor their impact closely.

In keeping with much of the second half of 2020, our portfolios performed strongly versus their respective benchmarks. We have touched on the value/growth style dynamic in previous updates and this month we were also helped by an uplift in Sterling which responded positively to the progress with Brexit trade negotiations, benefiting our UK overweight position and in particular our mid/small cap exposure.

We would like to take this opportunity to wish all of our clients a Happy New Year.