Markets continue to tread on choppy waters, as the delta variant causes headwinds particularly for emerging markets. However, the success of vaccine programmes in developed economies have seen daily infection rates in these regions continuing to fall at a steady pace. Performance of some main indices are highlighted below: 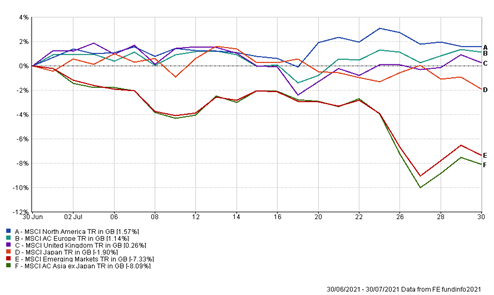 Inflation continues to be a trending topic in the second half of 2021, with central banks confirming price hikes are here to stay for longer than expected. A global shift to more active and expansionary fiscal policy is increasing the likelihood of both higher GDP and higher inflation over the coming months. However, a backdrop of rising inflation, paired with stronger growth may support Value stocks which have waned in comparison to their early year highs.

In the US, the economy recorded an important milestone as GDP surpassed pre-pandemic levels in Q2, with expectations that growth momentum will continue into 2022. Although the delta variant poses some downside risks to GDP growth, the risks have been minimised, avoiding significant negative impacts on the road to recovery. Growth momentum was also reiterated by the Federal Open Market Committee in its statement on 28th July, which stated that the US economy had made progress and indicated that tapering of asset purchases (QE) is likely to take place towards the end of 2021.  In addition, Q1 earnings season gripped investors as major players in the S&P 500 released earnings data; the overall blended growth rate for the S&P 500 is forecast to be 85.1%, marking the highest yearly earnings growth since 2009.

Like the US, an uptick in inflation in the UK which rose from 2.1% to 2.5% in May led to a slightly hawkish tilt by the Monetary Policy Committee (MPC), implying monetary policy could be tightened sooner rather than later. However, short-term expectations suggest that asset purchasing will be maintained in the August meeting, though the pace of buying will be reduced. The UK economy also experienced solid performance in retail sales, which were up 0.5% in June and higher than forecast, with a strong rebound in consumer spending set to continue amidst the unwinding of further lockdown restrictions.

The ECB’s forward guidance was left largely unchanged, reaffirming its near-term view with expected rate hikes set to be delayed and focus remaining on managing inflation. Economic data echoed the view of a global economic recovery in the Eurozone, as GDP expanded by 2% over Q2. The easing of restrictions and strong rise in both services and manufacturing PMIs indicated the impact of the delta variant has had little influence on growth momentum on euro economies reliant on tourism. Although downside risks are still present as the delta variant continues to loom, developed economies are fully equipped to weather the storm.

Over the month our portfolios have generated positive returns, building upon the strong start to the year overall and we remain above our stated benchmarks.