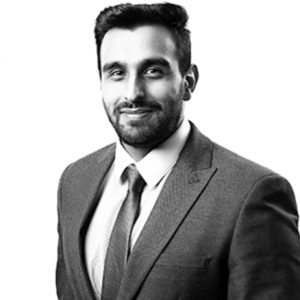 Markets continued to remain volatile over the month, as investors questioned the ability of central banks to combat inflation successfully, without causing a global recession. The performance of the main indices is highlighted below: 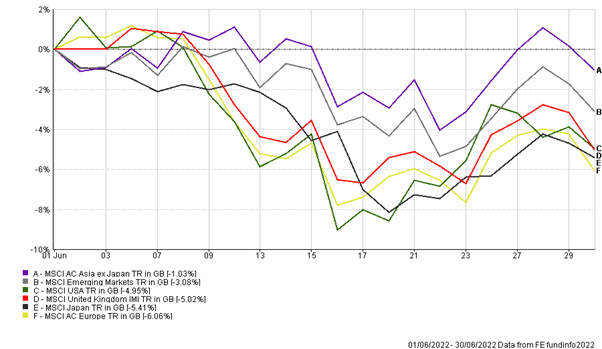 At the end of their two-day meeting the Federal Open Market Committee raised its benchmark policy interest rate by 0.75% to a target range of 1.5-1.75%, the biggest rate hike since 1994. In the subsequent press conference, chair Jerome Powell stated the fed is committed to controlling inflation and that an increase of 0.5% or 0.75% was likely to take place at the next meeting, but he does not expect this kind of move to be common thereafter.

The rate increase comes at the back of annual US consumer prices rising to 8.6%, the highest level since 1981 and an economic report showing US consumer inflation expectations increasing to a 10-year high, as well as consumer sentiment by American households falling to record low in June.

In Europe, the European Central Bank (ECB) took action to address the fears that the eurozone is on the verge of another debt crisis as we saw in 2012 and 2014. After an emergency meeting, the ECB announced measures to help to contain borrowing costs in weaker eurozone economies.

Yields on bonds of countries such as Italy and Spain increased to their highest level in eight years and spreads widen considerably between more stable sovereign countries such as Germany, after ECB members announced proposals to stop their asset purchase programme and to increase interest rates to tackle inflation, which is now at 8.1% in the Euro area. The measures involve increasing flexibility for the ECB to use the proceeds of their portfolio of assets to buy bonds of the most vulnerable countries to help contain any significant rise in yields.

In the Far East, China announced a reduction in its quarantine period for international travellers, coinciding with the unwinding of lockdown measures in Beijing and Shanghai. The relaxation of restrictions in the world’s second largest economy is significant, and it shows policy makers ambitions to achieve their economic growth target of 5.5% that will have positive spill over effects to the broader region. Local markets have responded positively to this in June and given our overweight position to Asia and the emerging markets, has been a tailwind to performance this month.

Closer to home, the Bank of England (BOE) raised interest rates for a fifth time in a row by 0.25%, taking its benchmark rate to 1.25%, with three members of the monetary policy committee voting for an increase of 0.5%.  The BOE warned that inflation would likely rise above 11% in October, mainly due to the rise in oil prices. The minutes of the meeting outlined that price pressures were starting to weaken areas of the economy and inflation was now being caused by rising consumer goods and a rise in service prices, as well as global events. As a result, BOE highlighted that it may have to act more forcefully, meaning potentially bigger rate hikes in the future.

Given the increased volatility in equities and fixed income this year, as interest rates and inflation have risen in conjunction with each other, we have taken the decision to sell down our iShares Gilt ETF holding, with the proceeds being reinvested predominantly in the M&G Global listed Infrastructure OEIC, along with the Artemis Global Income Unit Trust. The main reason for this change was to help generate greater exposure to both ‘value’ orientated global equities with a more defensive tilt, to help provide the portfolios with further protection from inflation, further diversifying our existing holdings.

As we manage portfolios during this difficult period in markets, we appreciate that you may have concerns regarding your investments. We still believe that equity-based investing remains appropriate over the medium to long-term and investors who take such a view will be rewarded for their patience. However, we remain vigilant as ever to the changing backdrop of geo-politics and macro-economic forces at play and will endeavour to continue to act accordingly where appropriate.