March has proven to be a more positive month for equity markets with broad indices posting good levels of gains to end the quarter on a high for investors. Performance of some of the main indices are highlighted below: 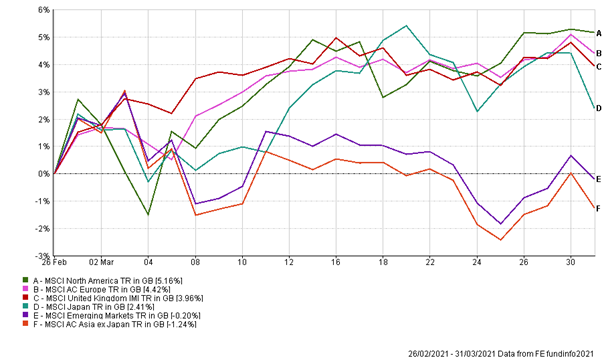 As you will notice from the graph, despite the overall gains there has been a significant divergence in performance this month between developed western markets such as the US, Europe and UK and the emerging east which we put down to an element of mean reversion given Asia’s more recent dominance.

Elsewhere, Investors seem to have put their immediate inflation concerns behind them despite yields continuing to drift higher and are instead choosing to focus on the absolute levels of yield which remain low – as we stressed in last month’s update. We are still seeing performance within individual markets being driven by stocks that would be categorised as “cyclical” or “value” and which can partly be explained by these movement in yields, but is also a broader trend that has dominated the last six months or so and has again been discussed in previous updates.

On the virus front this month there continues to be conflicting pictures regarding countries abilities to cope as mainland Europe is again gripped by a further spike in cases. This contrasts with the UK and United States who remain on course with the re-opening of their economy’s thanks in part to the success of their vaccination programmes.

Our portfolios followed markets higher for March, although did slightly underperform their respective benchmarks for the first time this year. Our underweight exposure to Europe and overweight positions in Japan and Asian will have been the biggest contributor of this. The performance does, however leave us firmly fixed in positive territory for the first quarter of 2021 and a reminder that our formal review and commentary for this will be available in the coming weeks.