Finally, some real progress! Global equity markets advanced significantly higher through November, buoyed by two key events. Performance of some of the main indices are highlighted below: 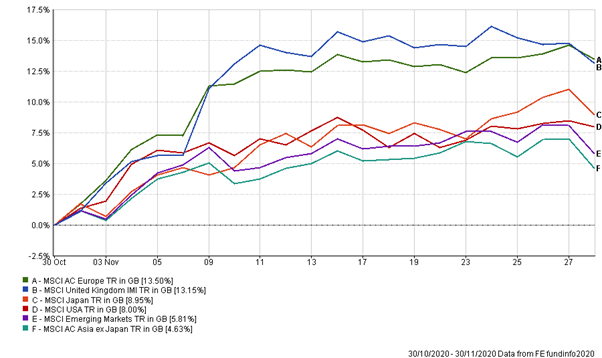 The month started well as markets reacted favourably to Joe Biden’s triumph over Donald Trump in the US election. Despite the President refusing to accept the result, doubting the legitimacy of certain States’ votes, the former Vice President Biden will now take office towards the end of January. Investors warmed to the prospect of softer rhetoric between the US and China, whilst Biden’s failure to produce a “Blue wave” increases the chances of a split house, which is likely to keep any of his more radical policies in check.

And then came the news that everybody had been waiting for – that there is a vaccine.…three to be precise! First, Pfizer announced it had successfully concluded its phase 3 trial with 90%+ levels of efficacy and this was quickly followed by similar announcements from Moderna and AstraZeneca. Whilst there is a recognition that this is only the start and the next challenge of rollout remains equally arduous, global stock markets, in general, soared reaching record highs. All three firms have now lodged emergency approval appeals with the relevant standards agencies and it is hoped the programmes can start before Christmas, allowing restrictions to be lifted an economic activity to return to normal levels by the middle of next year.

The only negative to come this month is the perceived lack of concrete progress in Brexit negotiations, which now move into their final month. On the face of it, much remains to be decided but we are hopeful that an amicable agreement can be reached.

In previous updates, we have highlighted the diversification within our portfolios, particularly as more growth orientated strategies and technology, in particular, continued to drive equity markets for large parts of the year. The large rises we have seen during the month have been more focused towards value rather than growth and given our diversification, this has benefited across the board, with all of our risk models having outperformed their respective benchmarks.