As we edge closer the end of another unpredictable year, markets have continued to perform well, overall. Covid hospitalisations in parts of Europe gripped headlines through November, as a sharp rise in cases led to the reintroduction of tighter restrictions in many countries. Whilst the booster rollout programme in the UK helped keep much of this at bay, the emergence of the new Omicron variant posed further challenges for governments and policy makers as winter approaches. 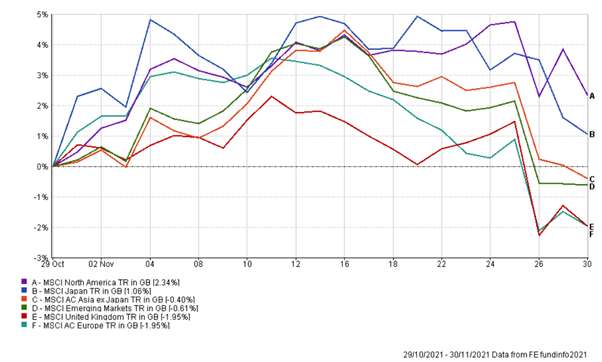 Elsewhere, Inflation continued to take centre stage with US CPI jumping to 6.2% year-over-year last month, marking its highest reading in over 31 years. Following his reappointment as Fed chair, Jay Powell performed a hawkish pivot by indicating that tapering may be fast tracked, setting an end to bond purchases by June 2022, as inflation began to look less transitory than first anticipated.

It was a recurring theme in the UK, although the Bank of England remained more accommodative in its policy stance with the MPC deciding to keep rates on hold in December, which caused Gilts to rally. Governor Andrew Bailey did, however, reiterate his view that they will likely be forced to act in the short term, as inflation is expected to hit 5% in the new year before an easing of pressures in the second half of 2022.

The end of November saw markets sell-off as investors grappled with this latest ‘Omicron’ variant and the prospect of a harsher lockdown. It is too early to reliably assess the severity of this latest strain, but early indications have been positive, and this allowed markets to recover some of their losses in the final day’s trading.

Our portfolios traded flat for the month, performing broadly in line with their respective benchmarks. Looking into 2022 we remain optimistic overall but take the view that heightened volatility is likely to characterise markets as new variants and inflation considerations impact sentiment in the shorter term.