October has been a negative month for markets, with heightened levels of volatility as three topics occupying investors’ minds come sharply to the fore. Performance of some of the main indices are highlighted below: 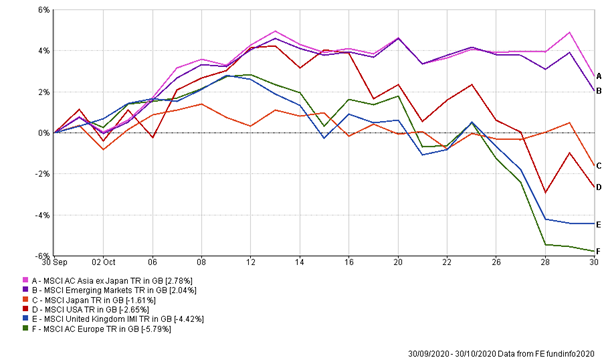 Over the coming days we should find out the results of the US Election as the country goes to the polls on 3rd November. Democrat Joe Biden remains bookies favourite although Donald Trump has gained momentum over the last week giving his supporters further room for optimism – should they need it. As we have mentioned previously, the conventional view that Trump would be better than Biden for markets, may not necessarily turn out to be true and indeed the best result at this stage might just be a conclusive one, either way.

The anticipated second wave of Coronavirus accelerated its sweep through Europe with Germany, France, (parts of) Spain and latterly England imposing a temporary lockdown. Government and Central Banks remain committed to providing support but without conclusive signs of a vaccine on the immediate horizon it seems that economic activity is likely to be subdued throughout the fourth quarter.

The end of the fourth quarter also brings the deadline for Brexit trade negotiations, which edges closer without sign of progress. Michel Barnier visited the UK towards for intensive talks in the final week of October and left stating “much remains to be done”. How much of this is posturing and how much is reality remains to be seen but with European leaders focus firmly on fighting the pandemic, timeframes would seem tight.

Throughout the month our portfolios were not immune to the wider market falls but continued their recent trend of outperforming benchmarks, which for our Growth models now extends over the past year.