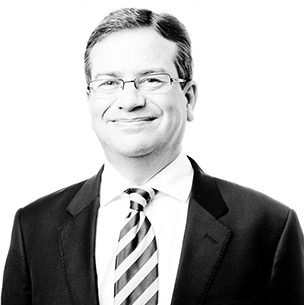 We felt it was appropriate to provide an update on the situation in Ukraine as well as our investment perspective, following the rapid escalation of hostilities this week and overnight.

November 2021-February 2022: Satellite imagery shows a new build-up of Russian troops on the border with Ukraine, and Kyiv says Moscow has mobilised 100,000 soldiers along with tanks and other military hardware. This follows a similar build-up in March/April 2021. Diplomatic efforts to persuade Vladimir Putin to resolve the situation are met with further escalation by Russia.

Monday 21st February: Following a long televised speech by Putin, Russia signs a decree to officially recognise the already separatist-held territories of Donetsk and Luhansk, situated in the Donbas region in the east of the country close to the Russian border. These allow Russia to move their military into the region in a “peacekeeping” capacity. This is widely condemned by much of the international community, notably the US, Europe, UK and Australia.

Tuesday 22nd February: The US and UK respond with sanctions targeting several Russian banks and close individual associates associated with Putin, together with limiting dealings in Russian sovereign (government) debt. These initial punitive steps appeared relatively limited and calibrated to the scale of Russian actions. More surprisingly, Germany halts certification of the Nord Stream II pipeline, which could have doubled the flow of gas to their country from Russia.

Thursday 24th February: Following a day of heightened rhetoric on all sides and a cancellation of planned diplomatic talks involving Russia, the US and France, Russia launches a multi-pronged attack on Ukraine, that has the appearance of a full-scale invasion of the whole country, rather than a so-called peacekeeping mission in the Donbas region. We await confirmation of the response from the international community.

What is happening in financial markets?

In reality, market concerns over Russia and Ukraine have persisted since the start of the year, with the focus of concerns being oil and energy, both are which Russia is a major provider of – As at the end of yesterday, the MSCI World ex Fossil Fuels index had fallen 11% year to date.

On the other hand, the oil price (already at multi-year highs for several months), surpassed $101 a barrel for the first time since 2014, with oil producers having enjoyed their best month in over 30 years in January, having suffered one of their worst periods less than two years earlier.

However, a greater concern for financial markets over recent months has been higher inflation as economies recover from the pandemic, leading to spikes in demand for oil and energy, as well as persistent supply chain shortages in basic materials and semiconductors, which are a key component in most electronic consumer and industrial products.

In other words, whilst the events of this week have certainly influenced markets, they are already volatile. We saw this in March 2020 when the oil price sank to multi year lows when there was a pandemic, but more pertinently a fallout between Russia and Saudi Arabia within OPEC about oil production levels drove the price down.

So where do markets go from here?

As COVID-19 amply demonstrated, we can rely on two basic truths for financial markets:

In 2020, global stock markets fell 30-40% over a period of just five weeks, as they were reacting to pronouncements from the scientific community that COVID-19 would require economies to lock down and it could take a decade to formulate an effective vaccine. In other words, they took a risk-off approach.

Once it was announced that candidate vaccines were being trialled and could go into production by the end of the year markets began a long recovery, despite the situation on the ground being unchanged. In other words, they saw through the crisis.

The usual market reaction to unquantifiable significant bad news can best be described as “knee-jerk”. Because we have no more information in advance of these events than the market itself, these reactions are very difficult to anticipate. Historically, however, once the initial uncertainties of a situation are dispelled, markets reappraise their initial response and adopt a less emotional and more rational approach to asset valuation.

We have numerous past examples of this, and the following table combined by JP Morgan illustrates how the US stock market has recovered rapidly following armed conflicts in recent years. 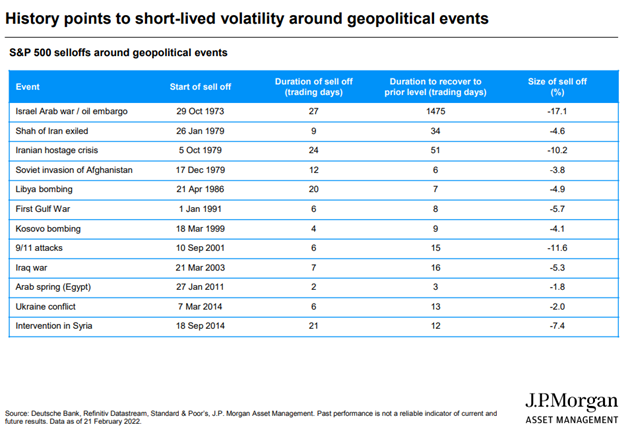 Will markets recover rapidly from their current levels?

Of course, every conflict situation is different, but it is worth considering the short-term uncertainties of the Russia/Ukraine conflict that in our view are negatively impacting markets.

The first key uncertainty is the scale of the Russian invasion and the effectiveness of Ukrainian resistance – Russia is believed to have committed approximately 75% of its conventional military around Ukraine and it appears that a full-scale invasion appears to be taking place. An initial invasion by 150,000 Russian troops may be swift, but it is anticipated that any long-term occupation could be resisted by a much higher (though less well-armed) Ukrainian population.

Realistically, we believe financial markets will be more concerned about the commercial impacts of the invasion rather than the aftermath, i.e. they are more concerned about the short term rather than the long term outcome of this invasion. What would change this is NATO troops becoming involved directly in the conflict in Ukraine or Russia making incursions into NATO countries, both of which we would consider unlikely.

The other key uncertainty is arguably more significant for financial markets, and that is the economic repercussions of Western sanctions and the Russian response to them. In the short term, Russian assets have been hugely devalued, including the Rouble, which has fallen 18% against the US Dollar since 26th October. Coupled with restrictions to capital markets, it is possible that Russia’s ability to finance its huge military campaign into the longer term will be adversely affected.

Most relevant to investors in the West, however, is the further impetus sanctions will give to oil and gas price rises. The effect this has had on our expectations for asset performance is that whereas we expected inflation to have peaked around mid-year before falling back over the rest of 2022, we now expect higher inflation to persist for longer.

Consumer spending will likely be under greater pressure than before as a result, but arguably the same money will be spent by them, though more in certain areas (oil, energy, supermarkets and interest payments) and less in others (discretionary/luxury purchases). In our view, this means that certain stocks should fare better than others, and we should take steps to tilt towards them within portfolios.

What changes are we making to portfolios?

Our portfolios already blend different equity and non-equity asset types, investing globally into companies of varying sizes and sectors. This means that although portfolios cannot defy market gravity, they are to some extent cushioned from the worst effects of reversals in certain areas.

Whilst we do not favour knee-jerk reactions within our own portfolio management, we have reduced client holdings in Emerging Markets with the intention of using the sale proceeds to tilt portfolios towards larger, more traditional industries that are better placed to benefit from a higher inflationary environment and further cushion returns in the short term. We are also looking to tilt our UK equity exposure towards larger companies for similar reasons, within an exchange-traded fund that can be traded intra-day, allowing us to dispose of (or add to it) very quickly if circumstances dictate.

Our Investment Committee meets weekly on a formal basis, but in reality, discuss and monitor developments daily, and will make further changes if deemed necessary.

Geopolitical events are troublesome for investors and investment managers (particularly when a world leader goes against all rational expectations), as they are less easily evaluated or predictable than economic cycles. In our September 2020 quarterly investment commentary we said the following, which we believe still applies:

“Wider geopolitical concerns, dominated by the US, China and Russia, are far-reaching and their outcomes are unknowable in the short term, as they have been for decades. What we do know is that compelling investment opportunities remain around the world, and that careful and considered diversification is the best way to reduce risk whilst aiming to stay ahead of inflation.”

In the short term, fear is dominating markets rather than optimism, so we are definitely in a “risk-off” phase. This usually means that demand for risk assets (shares) is lower, regardless of their continued profitability and temporarily valuations will reflect this. Selling out of holdings in these conditions when liquidity is not actually required often merely crystallises a loss that could have been a gain with a little patience.

However, as we strongly encouraged during the early stages of the pandemic, we believe that over the longer term (five years plus) markets will overcome such fears and the companies that we invest in via the investment funds in portfolios will continue to be profitable and their valuations will recover.

As always, your investment manager is happy to discuss any concerns you may have.