What would scrapping the State Pension triple lock mean for your retirement plans? 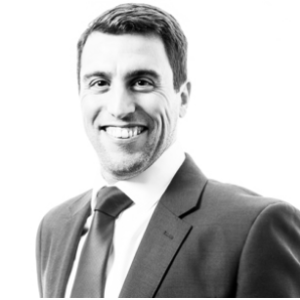 The State Pension triple lock has been in place since 2010 and ensures an annual rise in State Pension payments at least in line with inflation.

The system has its opponents. The government’s coronavirus borrowing so far this year – £174 billion between April and August alone – has reignited the debate and the Centre for Policy Studies (CPS) has gone so far as to call for it to be scrapped.

What has the State Pension triple lock meant for your pension over the last decade, why are there calls for it to change, and what might that change mean for you?

Before the coalition government introduced the triple lock back in 2010, the State Pension rose in line with the Retail Prices Index (RPI). This was consistently lower than the annual rise in earnings.

Current average life expectancies at age 65 – according to the Office for National Statistics (ONS) – suggest that your retirement could last 20 or 30 years. That’s a long time to be living on an annual income that is effectively losing value in real terms.

The triple lock ensures that the State Pension increases at least in line with inflation. In fact, it increases by the highest of:

These three separate measures – the triple lock – have greatly benefited pensioners over the last decade.

Here are the year-on-year State Pension rises since 2012: 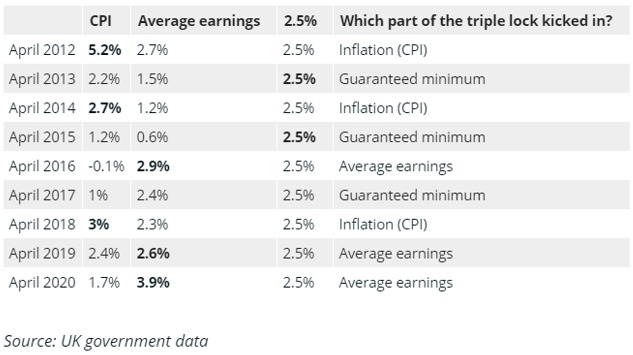 With inflation and wage growth low, two-thirds of the annual pension increases since the 2012/13 tax year, have been higher than 2.5%.

The Covid-19 outbreak has led to unprecedented government borrowing. Back in July, the Office for Budget Responsibility (OBR) predicted that the UK could borrow £372 billion this financial year.

The triple lock, although great for pensioners, is expensive. A Treasury committee report back in 2018 suggested it was already ‘unsustainable’ and the sheer volume of borrowing this year means that the government will be looking to claw back money from somewhere.

There is an added problem with the triple-lock amidst the coronavirus pandemic and it has to do with the government’s Job Retention – or furlough – scheme.

Widespread use of the scheme, which saw more than nine million workers paid 80% of their wages, means that average earnings for this year are likely to fall by around 7%.

Next year, however, as workers return to full-time employment, the average earnings figure will rise sharply. Under the current triple lock system, pensioners will receive a 2.5% increase this year (the guaranteed minimum) but up to 18% next year, in line with average earnings growth.

Earlier this year, former pensions minister Sir Steve Webb said that scrapping the triple lock was a ‘radical move’. A more likely approach, he suggested, might be a temporary increase of around 1% to 1.5%.

This would help to solve the problem of the estimated 18% rise in 2021, but the CPS approach goes further.

Mirroring Sir Steve Webb, they claim their suggestions are ‘radical but realistic.’ They argue that abandoning the triple lock in favour of a double lock could save the government around £2 billion a year.

Under this system, pensions would rise annually by whichever was the higher of earnings or inflation.

It might not account for a large share of your pension income, but it is the base on which to build your retirement plan. Possible amendments to the triple lock highlight the need for robust planning, taking into account inflation, potential changes, and the need – met through regular reviews – to hit your retirement goals and aspirations.

It’s unlikely the government will scrap the triple lock altogether, but the move to a double lock would affect your future pension increases.

We can help you consider your finances as a whole, taking into account all of your income streams, their reliability, and how well protected they are from the devaluing effects of inflation, to build a plan that works for you.

Whether it comes from the State Pension, private pensions, or investments, your retirement income needs to last for the rest of your life. A solid financial plan can give you the confidence and peace of mind that it will.

The value of your investment can go down as well as up and you may not get back the full amount you invested. Past performance is not a reliable indicator of future performance. Levels, bases of and reliefs from taxation may be subject to change and their value depends on the individual circumstances of the investor.